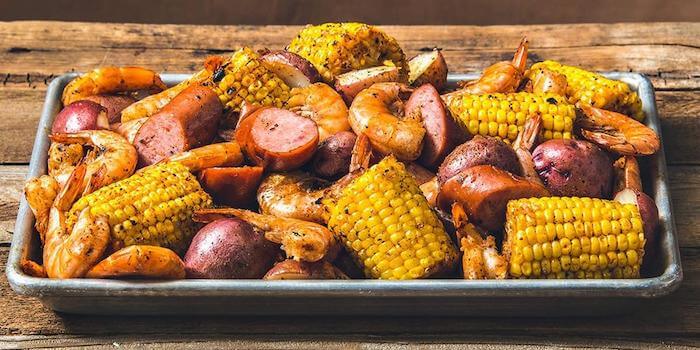 With Thanksgiving and Christmas coming up, you may already be starting the planning for your big holiday meals with your family and friends, complete with the smoked turkey and all the sides. But what if you want to get everyone together for a backyard meal before, between, or shortly after the holidays (football tailgate anyone)? A seafood boil makes a great option for this occasion!

Of course, many people associate a seafood boil with the summertime. And yes, this simple meal makes a fantastic choice for that time of the year. But, even in the wintertime, in the south’s mild winter days, a low country boil makes it easy to feed a large crowd without the formal pressure of holiday meals. Plus, you can do a delicious seafood boil on the grill or in your smoker!

Here’s what you need to know about seafood boils and how to ensure you end up with a grilled seafood boil that will have everyone digging in for seconds:

The Different Variations of a Seafood Boil

When it comes to what you want to put on your seafood boil, there are a couple different ways to go. The term “seafood boil” is actually an all-encompassing term for a type of social gathering meal that is cooked in a large quantity and will include shrimp and sometimes other seafood. The best part is, with any type of seafood boil, you can just dump everything out and let everyone dig in, making cleanup super easy.

Here is a brief breakdown of a couple of different styles of seafood boils:

Often referred to as a “crawfish boil”, “cajun shrimp boil”, or “crab boil” and will usually include the one type of shellfish, as well as corn on the cob, new potatoes, andouille sausage, and onion. A seafood boil in Louisiana will usually be on the spicier side and seasoned with cayenne pepper, hot sauce, lemons, bay leaves, and other cajun spices.

Low-Country boils, sometimes referred to as Frogmore stew or a Beaufort boil, originated in the Carolinas, eventually making their way down through Georgia, and are usually much milder in flavor compared to Cajun boils. Though they do sometimes contain a little bit of hot sauce, the flavor of these boils will often mainly revolve around butter and Old Bay seasoning. It will always have shrimp and they’ll also include corn on the cob, red potatoes, sausage, and sometimes ham. Unlike Louisiana boils which usually only have one type of shellfish, a Low-Country boil will sometimes also have crabs, crawfish, or mussels included as well. And sometimes even a combination of all of it. 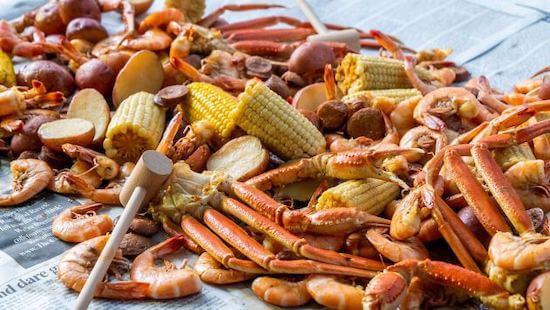 In a Large Pot on the Grill:

Using a large pot to boil everything together is the most traditional way to cook a seafood boil on the grill. Depending on the type of smoker you have, you may have room to use a pot insert and smoke your boil in a pot also.

Here’s how to do a large pot boil-

In Foil Packs on the Grill or In the Smoker: 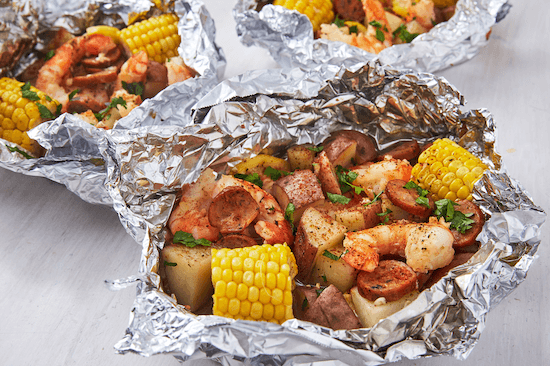 This method is a fun alternative to the traditional pot boil and allows you to really smoke everything and infuse some of that great wood-fire taste you love. Doing foil packs will cook everything through more of a roasting/steaming method than traditional boiling.

Another advantage to this method is that everyone will have their own individual portion already separated out. Here’s how to do foil packs -

In a Large Foil Pan on the Grill or in the Smoker:

Similar to the foil pack method, cooking everything in a large foil sheet pan will also allow you to infuse that great smoke flavor into your boil. Here’s how to do it -

Tips to Ensure Your Boil Turns Out Perfect

If you want to ensure you end up with a delicious seafood boil that will have everyone raving, there are definitely some pro tips to keep in mind. These include:

Make Sure You Have Enough of Each Ingredient for Everyone

To ensure you have a successful seafood boil, it’s important to make sure you include enough of each ingredient for everyone to get a good portion. Of course, this may leave you with a little leftover, but it’s better to have a little too much than not enough for everyone.

To give you an idea of how much to get, here is a breakdown of ingredients for if you were doing a shrimp boil in foil packs on the grill. For every 4 people you want to have:

For this amount of ingredients above (for 4 people), you would need this much seasoning:

No matter what time of the year it is, a seafood boil on the grill is a great way to easily feed a large crowd and have very little cleanup to worry about afterward. As you can see, the process is very simple and you can get creative with what exactly you want to put in it. Whether you have a grill or a smoker, you can quickly cook up a delicious seafood spread big enough to feed a small army.

Have you done a grilled seafood boil recently? What is your favorite type of boil, maybe a cajun shrimp boil or is it a low country boil? Leave a comment below. We want to hear from you!

Want more great backyard BBQ recipes you can cook all year long? Check out our step-by-step virtual Championship Backyard BBQ Classes with some of the top competition Pitmasters and Grillmasters. In these, you’ll learn a variety of delicious recipes with all of the insider tips you need to know. You can master your backyard cooking today!

Also, make sure to subscribe to the BBQ Champs Academy YouTube channel to stay on top of all the latest insider info and competition BBQ news straight from pros!