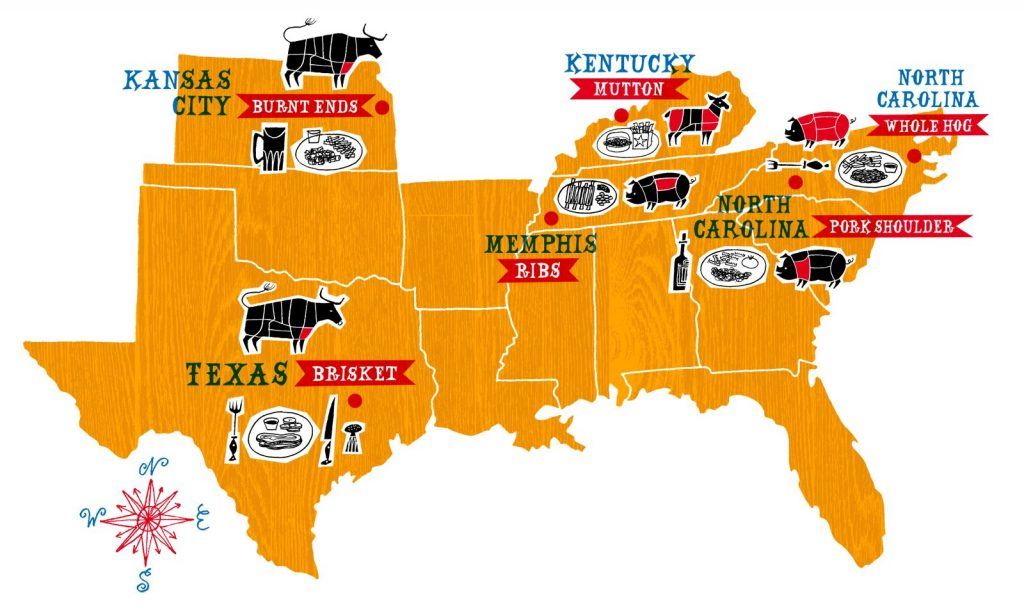 One thing many Americans can agree on is that the taste of good BBQ is a favorite staple. But, depending on where in the U.S. you’re eating it, the flavors may taste very different than your neighbors’ a state away. At the start of the 20th century, with the rise of more and more BBQ restaurants, the pitmasters within different regions each started crafting their own unique barbecue identity. From different types of wood for the fire, different cuts of meat, and different sauces and rubs.

There are now a large number of distinct regional barbecue styles throughout the U.S. Each with its own unique flavor profile based on some of the popular local ingredients and taste preferences. Some are a tangier mustard-based flavor, while some offer a brown sugar sweetness.

Let’s take a look at some of the most well-known regional barbecue styles in America and how they all taste a little different:

Often referred to as the “world’s barbecue capital”, it’s clear the Kansas City knows how to cook barbecue and does it for a large array of meats. Barbecue has been prevalent in the area since the early 1900s. All because of a man named Henry Perry who was serving up barbecue with his secret dry rub from an inner-city pit near the Garment District.

That dry rub tradition still continues today in Kansas City. Meats including beef and pork ribs, chicken, pulled pork, brisket, and sausage are all cooked over hickory wood and dry-rubbed. You’ll also find a large variety of sauces available on the side. But, most sauce recipes in the area include tomato and molasses to create a thick, tangy and sweet sauce.

One barbecue item Kansas City has become known for is burnt ends. These charred tips of beef brisket are a popular staple on barbecue restaurant menus throughout the city.

Some may argue that St. Louis could hold its own as the “barbecue capital” since residents consume more barbecue in this city per capita than anywhere else in the country.

One clear distinction of St. Louis barbecue is pitmasters prefer to grill then sauce versus dry rub and smoke. The barbecue sauce is somewhat similar to Kansas City in that it is a sweeter tomato-based sauce. You’ll most often find it served as a thick sauce, but it can also be found in thinner varieties or sometimes with a tangier and spicier flavor.

St. Louis is known for its pork spare ribs that are trimmed perfectly neat and clean. But don’t think the trimmings go to waste. These are cooked and popularly served as “rib tips”. You’ll also find thin-cut pork shoulder steak that is either seared and smoked or simmered in a slow cooker with plenty of sauce.

When people think of barbecue in Tennessee, the first thought is often Memphis-style barbecue. This is no surprise, especially when many people will argue that Memphis pork ribs put up a good fight against St. Louis ribs. The difference is that Memphis-style barbecue is slow-cooked in a pit with a paprika-based dry rub versus a wet sauce. Although you will often find a thinner, vinegar and tomato-based sauce served on the side. 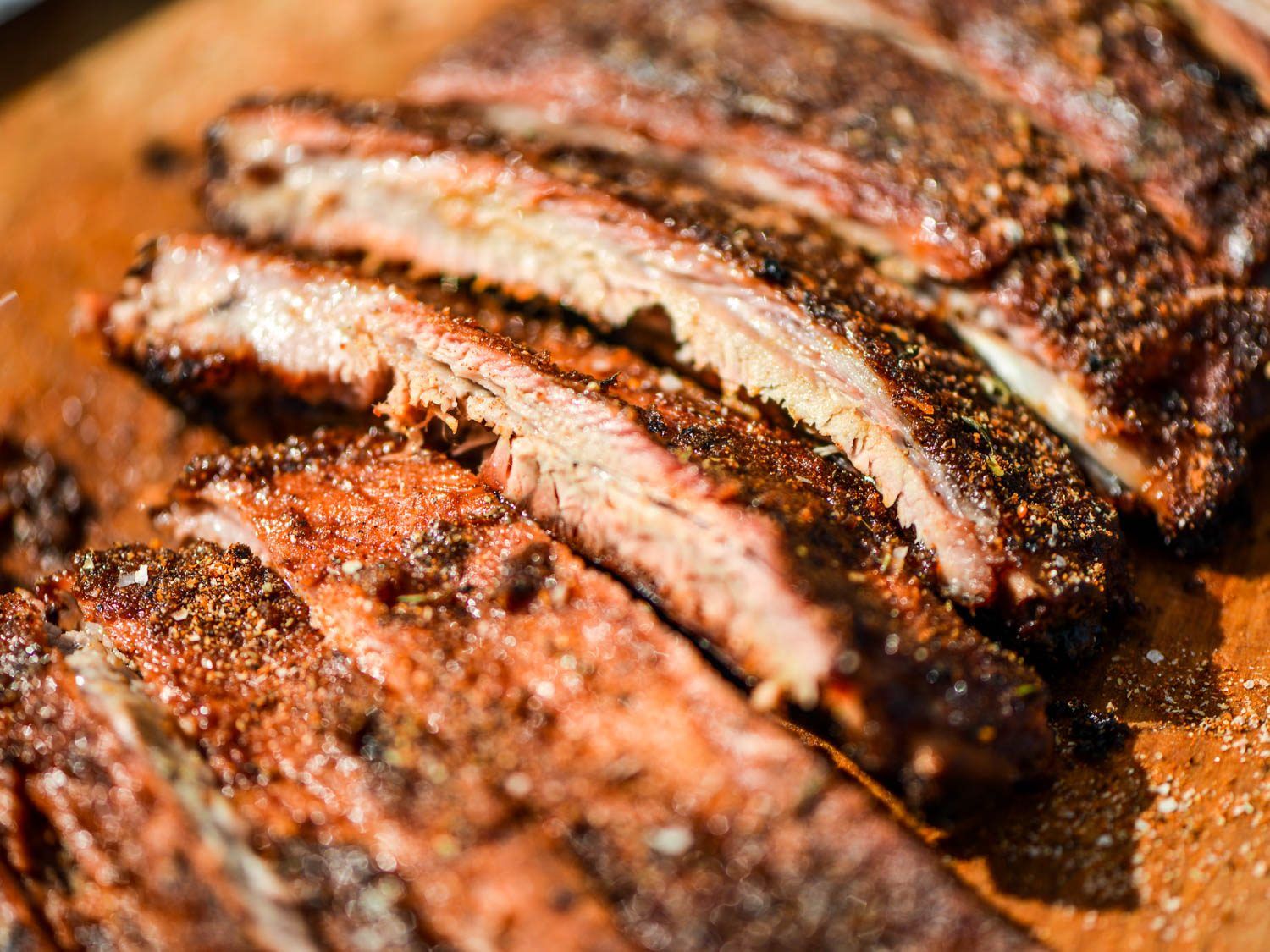 One thing is for sure, Texans know how to smoke a brisket. Texas is home to great beef cuts of world-famous Texas steer, thus great barbecue beef brisket and beef short ribs. It is also where you’ll find four distinct regional barbecue styles: Central, East, West, and South.

Central Texas barbecue is the most well-known Texas-style. This style involves smoking beef brisket over oak (or sometimes pecan) and hardly using any barbecue sauce. The meat flavor speaks for itself and is often just seasoned with salt and pepper and sliced. You’ll also find a lot of sausage making due to German immigrant influences.

East Texas is an area that prefers the flavor imparted by hickory wood and often slathers the meat with a tangy, tomato-based barbecue sauce. You’ll mainly find chopped beef and pork as the favorite cuts for East Texas BBQ.

West Texas is where you’ll find more of the cowboy style of barbecuing that is done over an open fire and direct heat.

Finally, South Texas style is based on the barbacoa traditions, taken from Mexico, where slow-cooking is done in a covered pit.

North Carolina offers two distinct regional barbecue styles of great-tasting flavor. In Eastern North Carolina, you’ll find that whole hog smoking over hickory wood is the preferred method. The meat is then mopped with a spicy vinegar-based sauce made from vinegar, salt, and red pepper before being chopped.

In Western North Carolina is where the style often referred to as “Lexington style” comes from. This barbecue style revolves around pork shoulder that is smoked to let the skin caramelize and form a crispy layer, then sliced or chopped. The preferred sauce is the vinegar-based sauce from Eastern Carolina but with tomato and brown sugar added.

South Carolina barbecue is another style that revolves around whole hog cooking, but extra slow and over low temperatures. But, there are several distinct barbecue sauce flavor profiles you’ll find throughout the state.

One of the most popular being a sauce referred to as “Carolina Gold”. South Carolina makes up the first of the states within the “Mustard Belt” of barbecue sauce. Carolina Gold sauce came from German Immigrant influences and is a pungent mustard-based sauce with brown sugar and vinegar.

In contrast to that sauce, in the Pee Dee region of the state, you’ll find a vinegar-based sauce very similar to Eastern North Carolina. Then, in the Midlands and Low Country areas of South Carolina, you’ll find a mustard-tinged bright red sauce that is sweeter and tangier. 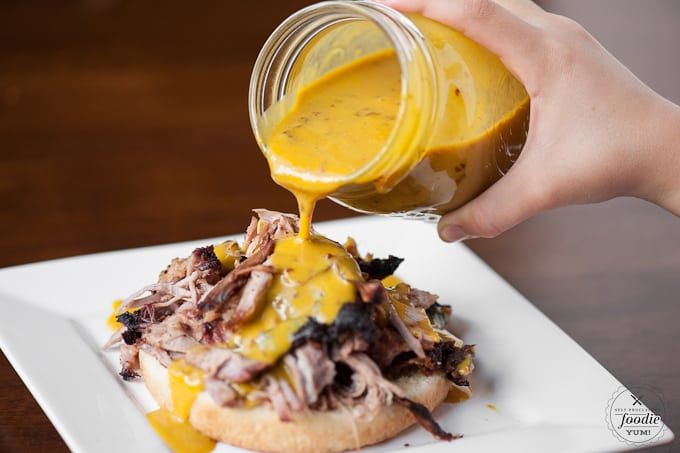 Georgia is usually not one of the first places that is thought of when you say barbecue, but it is definitely still the home to some great tasting meat. Throughout the state, chopped smoked pork is the most prevalent cut you’ll find.

You’ll often find the pork served with a thin, savory barbecue sauce that has more tomato than the Carolina sauces. But, with Georgia also being included in the “Mustard Belt” of barbecue sauce, you’ll also find a tangy, mustard-based sauce similar to Carolina Gold available.

Another popular staple at Georgia BBQ restaurants is Brunswick Stew, which is a delicious mix of corn, chopped smoked pork, and potatoes.

Alabama is home to some great southern barbecue. Local pitmasters in Alabama also prefer the flavor of hickory smoke and cook an abundance of smoked pork shoulder and barbecue chicken.

One thing that Alabama style barbecue has become famous for is a sauce known as “Alabama White Sauce”. This is a Northern Alabama mayo-based white sauce with vinegar and black pepper that was invented in 1925 at Decatur’s Big Bob Gibson BBQ restaurant.

Chicago is another area that may not be on the top of your mind when it comes to barbecue but is definitely not one to be dismissed. Barbecue in Chicago picked up in the mid-20th century with a surge of Mississippi Delta natives to the city’s Southside.

Chicago-style barbecue offers ribs, rib tips, and spicy sausage known as hot links smoked over hickory for shorter periods. This makes the rib meat stay a little thicker and stick to the bone. If you ask a local Chicago barbecue lover, chances are they definitely don’t like soft meat falling off the bone. It’s a texture thing. You’ll also find the meat doused in a sweet, tomato-based sauce.

One defining characteristic of Chicago barbecue is that it is cooked in what are known as “aquarium smokers”. These are large, rectangle smokers with plexiglass construction so that pitmasters can visually keep an eye on the meat without opening the smoker. 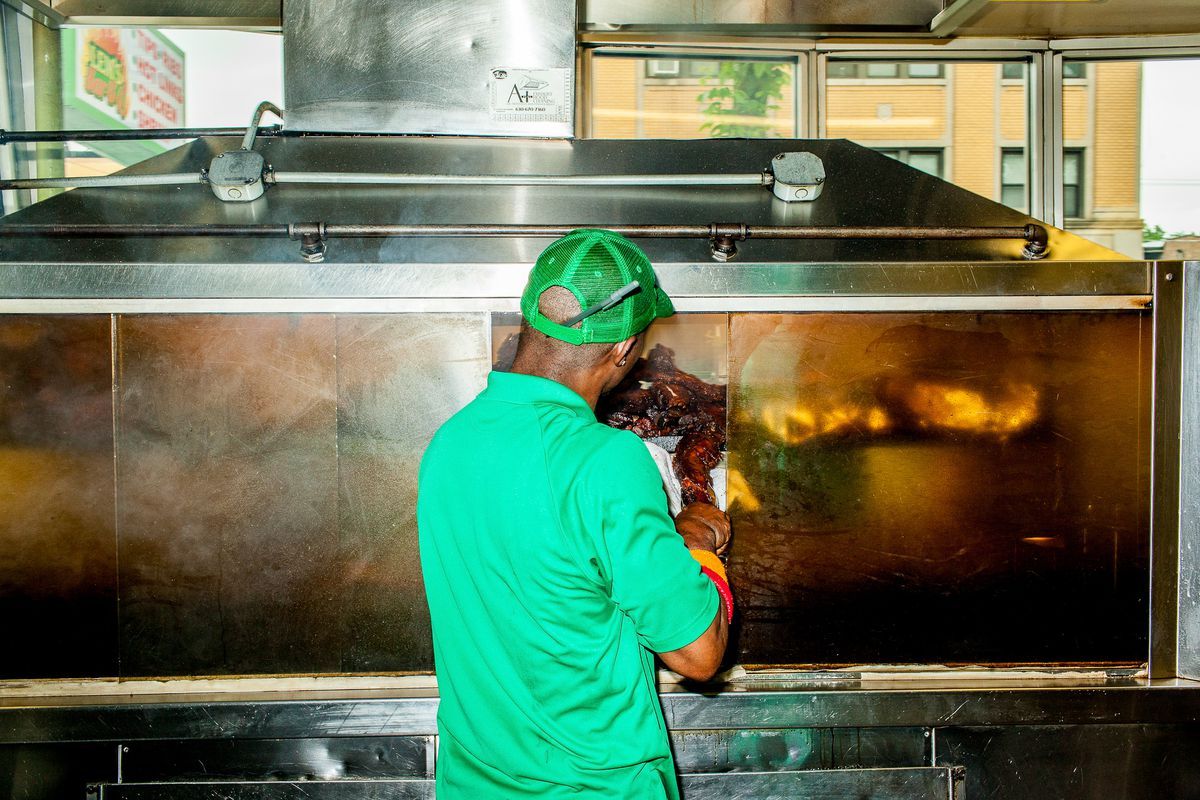 Kentucky barbecue varies wildly from county to county across the state. Throughout the Eastern part of the state, the barbecue is mainly pork based with things like chopped or pulled pork shoulder and pork steaks smoked over hickory. In this part of Kentucky, you’ll also find sauce flavors that are similar to North Carolina.

In Owensboro and throughout Western Kentucky is where you’ll find an abundance of mutton, meat from mature sheep, being served. You’ll find pulled or chopped mutton as well as what is known as burgoo. This is a hearty stew of roasted mutton and a variety of other meats. The barbecue sauce throughout this region is a Worchestire-heavy sauce with allspice. Eastern Kentucky also uses this sauce or a more vinegar-based sauce.

As you can see, there are many different regional barbecue styles and flavors throughout the U.S. You may even have a favorite that you prefer. The good thing is, with the number of BBQ restaurants and pitmasters around the country now, you can get each of these styles without having to travel too far.

Perfecting some of these particular regional styles and other BBQ techniques are just some of what you’ll learn in our first-of-its-kind online BBQ cooking school here at BBQ Champs Academy. You can even try your hand at some great championship backyard recipes using regional influences. Our world-champion pitmasters and grillmasters will have you cooking mouth-watering barbecue in no time.

Do you have a favorite regional barbecue style? Do you know of another style or secret “local favorite”? Leave a comment below. We want to hear from you!