South African Braai: What It Is & Why You Should Try It Today! 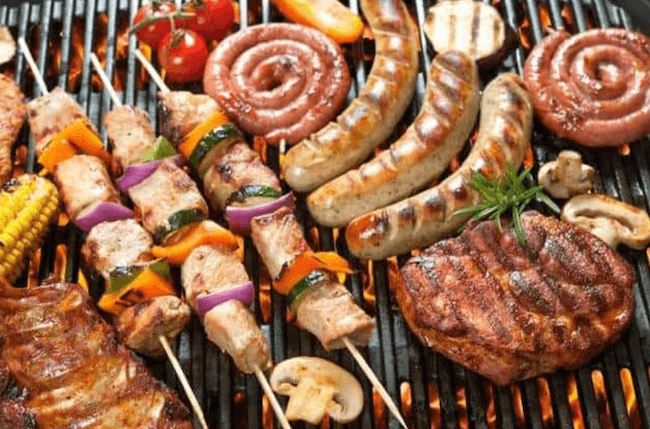 With the Fourth of July quickly approaching, you may already be thinking about the big gathering of family and friends that you are planning and what you are going to be cooking. Chances are, most of that cooking will be done outside on the grill.

When it comes to outdoor cooking for a large gathering, Americans aren’t the only ones who have mastered it, cherish it, and love to do it as much as possible. South Africans are another culture that knows a thing or two about cooking big feasts over a large wood fire.

If you have spent any time around a South African, there’s probably a good chance that you’ve heard them mention doing a “braai” (pronounced “bry”). This often weekly tradition, which is much more than a simple BBQ, is a huge part of South African culture and something that has been growing in popularity throughout the U.S. And there’s no surprise that this is happening. Americans and South Africans clearly have a shared love–delicious grilled food.

In this article, we’ve broken down exactly what a braai is, what it involves, and why you should try it today.

What is a Braai Exactly?

To put it simply, a braai is the South African equivalent of an American barbecue. A common (and very frequent) practice in any South African household, a braai is a fundamental part of South African culture and is a gathering of friends and family around a wood-fire grill in celebration.

Even through South Africa’s turbulent past, braaing is a tradition that continues to tie the nation together. It is one of the few things that are not specific to one cultural or ethnic group in South Africa–everyone braais. (There are 4 ethnic groups and 11 different languages in South Africa.) For South Africans, the simple act of cooking food over a fire is something that everyone feels connected to—no matter who they are and what language they speak. It’s a social gathering where friends are always welcomed as family.

Compared to the American BBQ that you are used to, South Africans take the gathering/cooking at a much slower pace. A braai is a special “meat-fest” that can often last for hours on end.

Also, a traditional braai is cooked over local hardwood, like kameeldoring wood, which gives the meat and other sides a distinct flavor. Apple wood is another wood species that is good for braaing and is more available in the U.S.

One important point to note is that a braai will never be cooked on a gas grill. Traditionally, the grill itself will be an open grill that has a diamond-patterned metal grill grate (aka grid) or regular grill grates and a large, flat fire pit. (Like these Kudu grills.) If you don’t have a braai-specific grill or plan on getting one, you’ll need at least a kettle grill or fire pit that can accommodate a wood fire, like a Weber Grill, Big Green Egg, or Char-Broil charcoal grill. 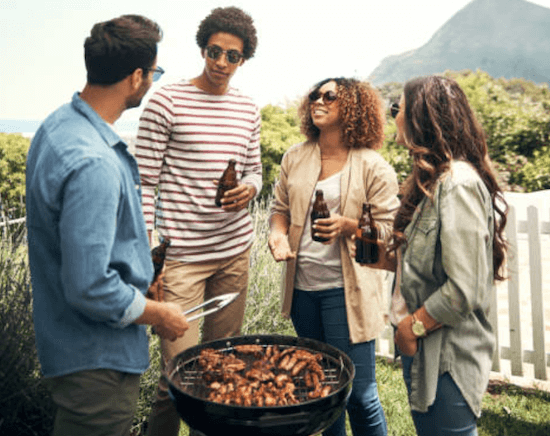 When Do You Have a Braai?

South Africans rarely need an excuse to have a braai. In many cases, families will host a once-weekly smaller braai (even a breakfast braai) and do a bigger braai on special occasions. No matter the time of day, the day of the week, before or after work, rain or shine, braais can and will happen. So, if you are going to have a braai, do it whenever you feel like it!

Officially, September 24th is Heritage Day in South Africa but it is also unofficially known as “braai day”. Pretty much every South African will be having a or attending a braai that day.

What is Served at a Braai?

South Africa’s diverse history is quite evidently reflected in what you’ll usually find on a braai grill. Indonesian slaves, brought to the country in the 1650’s by Dutch settlers, brought spices with them such as cardamom, ginger, and curry pastes. They are also the source of common items such as sweet and spicy chutneys and sosaties (aka kebabs). The Dutch also brought their own spices and dried fruit (used for chutneys).

Meanwhile, the indigenous South African people offered a wide variety of meats (including what we consider game meats), local fish from around the Cape, and goat and mutton from further inland. The traditional spicy Peri-Peri sauce is thanks to Portuguese traders who brought the bird’s eye chili to South Africa.

Due to all these influences, a traditional South African braai is usually a delicious global adventure. The meat is the center of attention for any braai. But there will also usually be a variety of snacks and sides to go along with the main dishes. Some of the things you’ll find on offer at a braai will usually include:

Biltong and Droëwors - Both of these are cured, air-dried meat snacks that are specially seasoned with spices, mainly coriander. Droëwors are thin round sausages based on the popular boerewors, while biltong is usually cut into small thin slices from slabs of beef.

Chips ‘n Dip - The dips will usually include smoked snoek pate and hummus (which usually has garlic and tahini). Snoek is a fish native to South Africa and is a species of snake mackerel.

Boerewors - Meaning “Farmer’s Sausage” in Afrikaans, this traditional fresh sausage is either made from entirely beef or a combination of beef and pork and usually comes in a large coil. This sausage is abundantly spiced with ingredients such as coriander, cloves, black pepper, allspice, and nutmeg. 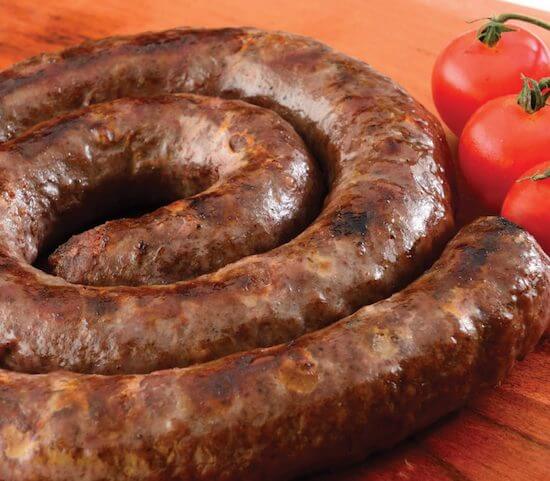 Steak -  For a braai, you will often find a variety of beef steak cuts including ribeye, T-bone, filet mignon, sirloin, and rump. In South Africa, ostrich steaks are also a favorite.

Chicken - Chicken kebabs are a popular option as well as beer-can chicken, where a whole chicken is cooked over the grill with an open beer in the body cavity.

Seafood - Seafood is also a very popular item. This will usually include things like South African crayfish tails (rock lobster), tuna, or yellowtail.

Other common meat items for a traditional braai include ostrich burgers and wild boar sausages.

Pap (pronounced Pup) -  Similar to what many Americans know as grits, this is a maize porridge that is made with chicken stock, butter, and maize meal. It can be made to be runny, soft, or stiff.

Potato bake - This favorite braai side dish usually combines sliced potato, cream, as well as ingredients like caramelized onion and Parmesan cheese and is baked in the oven ahead of time.

Roosterkoek - These are balls of bread dough that are cooked on the grill and served as an accompaniment to the Braai meat.

No braai is complete without an abundance of sauces and South Africa has no shortage of incredible sauces. These include peri-peri sauce, fresh chimichurri, and sweet chutneys. Don’t be afraid to use these generously. There should also be an abundance of cheese as a side to eat with the meats as well.

Of course, no braai is complete without some delicious wine, cold beer, or mixed drink. South African Sauvignon Blanc pairs great with chicken and seafood, while Shiraz or Cabernet will be your best bet with red meats and sausage. Pilsner and IPA beers all pair very well with traditional braai food. Another popular braai drink is brandy and coke. 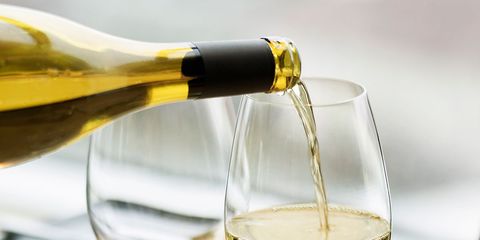 The Rules/Etiquette of a Braai

There absolutely is braai etiquette and it’s usually taken pretty seriously. The host of the braai and the one who is in charge of the fire and meat is known as the “braai master”. Every braai master usually has their own process of doing things, preference of wood, and preference of meats. When going to a braai, keep in mind that, backseat braaing is heavily frowned upon. So, don’t try to start suggesting “better” ways that the braai master could be doing things.

There are two types of braais in regards to what people should bring. For a “chop ‘n dop” braai, guests are expected to bring their own meat and wine/beer and the host will provide the rest. For a “bring ‘n braai,” the only thing the host is providing is a fire, so guests should bring their own food and drinks. Unless it is a breakfast braai, the braaing will usually begin in the afternoon (around 3 p.m.) and go well into the evening. It is a process that is never rushed.

As we mentioned above, if you are wanting to host a braai, gas grills are a big no-no. Only hardwood should be used. Although charcoal can be used as a last resort.

When it comes to the tradition of South African braaing, it is just as much about the intense sense of inclusivity and human connection as it is about the delicious food itself. After reading this guide, you should now have a good idea of how you can do something different, gather your friends and family together, and recreate a braai in your backyard.

So, If you are looking for a new outdoor cooking experience with some different tastes than your normal American BBQ, cook a South African braai today!

Have you been to a South African braai? Do you plan on hosting your own braai soon? If so, leave a comment below and tell us about it. We want to hear all about it!

Want to learn some more new recipes and pro tips to elevate your backyard cooking skills? If so, join us in our Championship Backyard Cooking Classes here at BBQ Champs Academy! These step-by-step outdoor cooking classes are taught by Champion Pitmasters and Grillmasters and you’ll learn exactly how to cook 20 delicious smoked or grilled recipes.

And if you want to dive into competition-caliber smoking and grilling, get your All-Access pass today! In these tell-all online BBQ classes, the Champion Grillmasters and Pitmasters will show you exactly how to master cooking several different cuts of meat in your smoker or grill, provide all the in-depth pro cooking secrets, and more. You’ll be cooking competition-level barbecue in no time!

Don’t forget to also Subscribe to the BBQ Champs Academy YouTube channel to get all of the latest competition BBQ news and insider info straight from the barbecue pros!