Why Does BBQ Meat Taste So Good? (It’s Science) 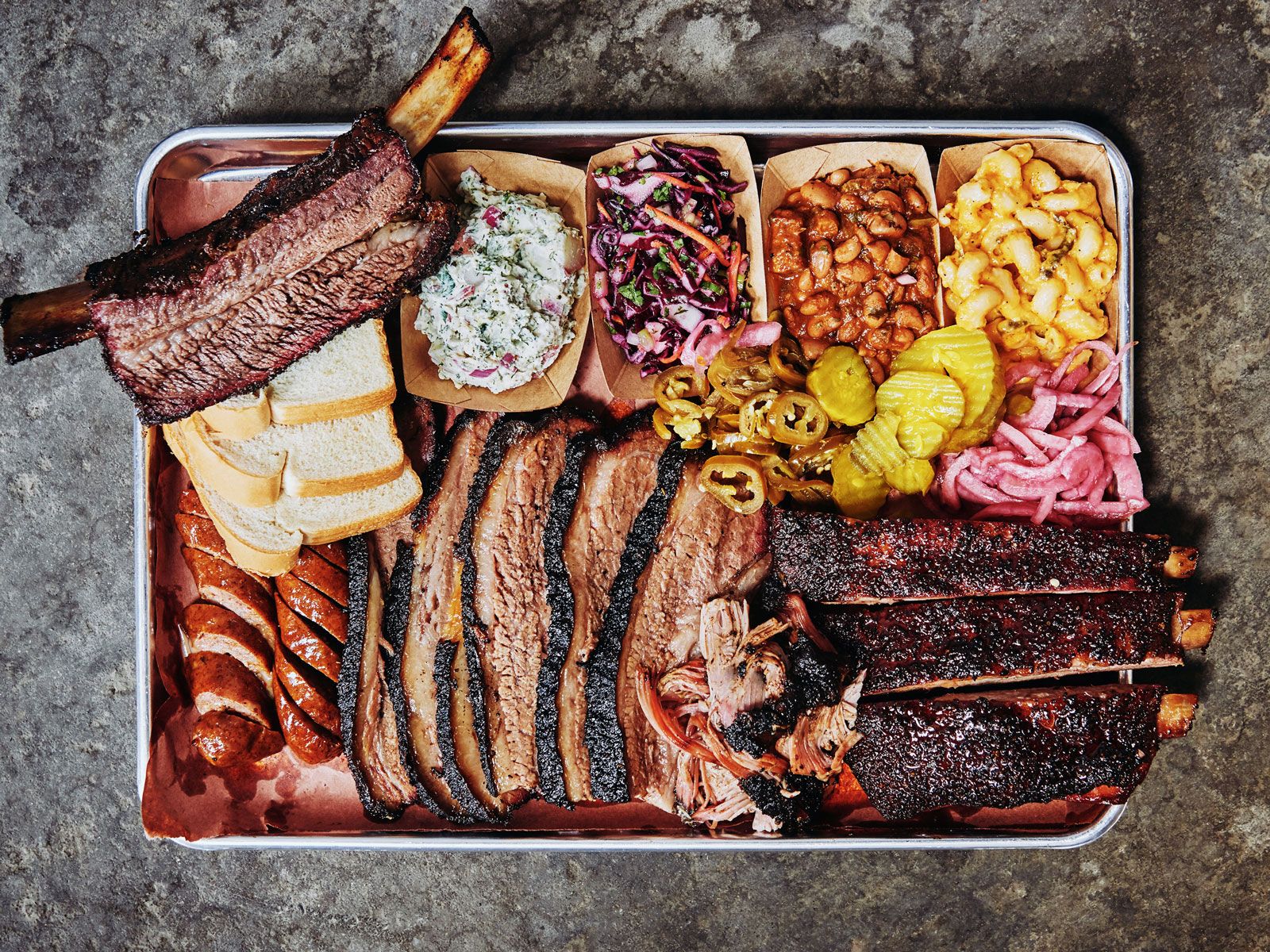 Have you ever taken a bite of a hot and juicy piece of BBQ meat off the grill or smoker and wondered how it can possibly taste so good? Your immediate thought might be that it must be the rub that was used. Or the sauce it was finished with. But it is much more than that. To be a great BBQ pitmaster it truly comes down to science. Let’s take a look.

Hitting All Of The Flavor Profiles

Any truly great BBQ cooking class will tell you how impactful it is to not just utilize one of the main flavor profiles but a combination of several of them. Doing this will help you create a flurry of signals to the brain from the taste buds.

Our tongues contain over 10,000 papillae (pah-pill-ah). These are the little bumps on your tongue that contain your taste buds. With such a complex system for taste, using multiple flavor profiles is a key component to great BBQ. In doing this, you will cook food that is dynamic in flavor and will truly wow your friends, family, and even judges.

The four main flavor profiles that most people are familiar with in BBQ are salty, sweet, tangy, and spicy. In 2002, scientists officially recognized a fifth flavor profile that is extremely relevant to great tasting BBQ: umami. Umami (ooh-ma-mee), simply translated from Japanese, means yummy. Because of its similar characteristics, this flavor profile is sometimes lumped in with techniques for saltiness.

In being familiar with each of the profiles and how certain ones play off of others, you can create a balanced taste that will make anyone’s taste buds dance. You can utilize any of these flavors within your rubs, sauces, brines, or even complementary sides. The goal is to create a harmonious overall flavor profile for your meat. 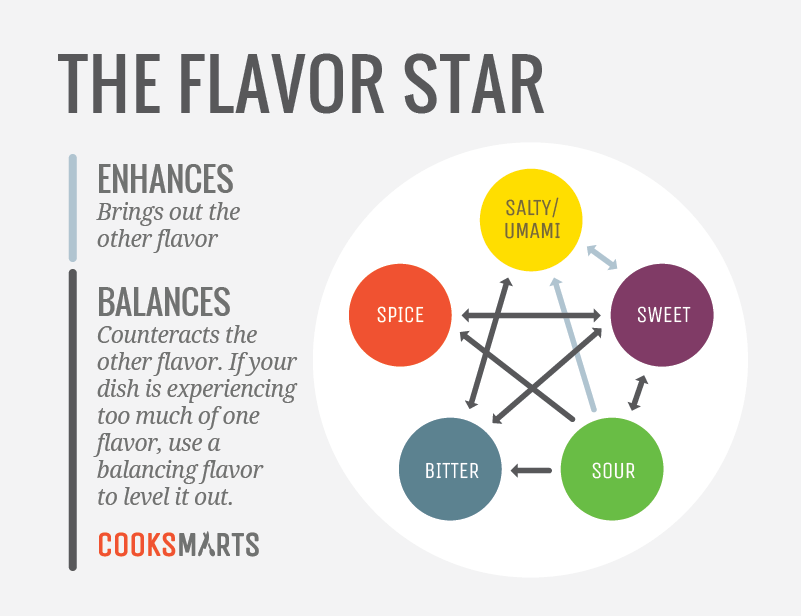 The flavor profile of salty is what most people are familiar with and is one of the more forward-tasting of the flavors. When meat or other food is under-seasoned, salt is an obvious option to correct that. Salt does naturally occur in most meats and some foods like tomatoes. But, you can add savory depth to your meats and foods by adding things like kosher or sea salt, tomatoes, or cured bacon. Salt flavor counteracts and balances tangy flavor.

Umami is achieved by using one or more of three elements: Glutamate, Inosinate, Guanylate. Glutamate is an amino acid that is found in “salty” things like soy sauce or parmesan cheese. It is also something that naturally occurs in meat. Inosinate is those hearty tastes found in muscle fibers of meat and fish. Guanylate is found in things like dried mushrooms and other earthy ingredients and is only ever used in combination with Glutamate or Inosinate.

One element of Umami is often enough to create delicious food, but when two elements of Umami are combined it is what is called a “Umami Bomb.” This is a flavor explosion that many people crave. Think amazing dishes like grilled steak with sauteed mushrooms or combining several umami elements in your BBQ seasoning mix.

Many great BBQ pitmasters utilize some level or form of sweetness in their BBQ. It is important to understand that sweet is not just for desserts. Sweetness can help balance the tangy and spicy flavors and create a unique and flavorful taste that will be hard to forget.

Sweet flavor can be added to BBQ by the use of things like honey, maple syrup, raw sugar, or apple.

By utilizing tangy or sour flavors you can balance both salty and sweet flavors and create a deliciously complex flavor combination in BBQ. It will instantly brighten up the seasoning of the entire dish.

You can achieve tangy flavor by using ingredients like lemon, different kinds of vinegar, mustard, grapefruit juice, or even beer.

Another familiar flavor profile for many people is spice. Even just a small amount of heat can create mouth-watering BBQ and sides. Spicy flavors also perfectly balance sweet so if something is tasting too sweet, adding a little bit of heat will do the trick and create a mouth-watering overall taste.

Spice can be added to BBQ through the use of hot sauces, pepper jellies, Habanero rib candy glazes, fresh hot peppers, and more.

When combining several of these flavor profiles, it is also important to know the scientific processes that happen to meat when it is cooked and how this enhances the flavor even more.

One of the many scientific processes that happen during cooking is called the Maillard Reaction. This has a profound effect on the flavor and aroma of the meat. This scientific process was named after Louis-Camille Maillard. He was a French scientist who studied the browning of foods during the early 1900s.

The Maillard Reaction is based on high exterior temperatures that cook meat (and other food like bread) from the outside in. It starts when you reach cooking temperatures between 300 and 500 degrees Fahrenheit. The outside of the food meets much higher temperatures before the inside of the meat. This triggers the beautiful browning reaction on the outside surfaces of the meat and gives the robust flavors you are trying to achieve. This reaction will intensify the flavor profiles you have used for your BBQ and create delicious food.

To break it down into more detail, the Maillard Reaction is specifically a reaction between the amino acids in proteins found in meat and the reducing sugars of fructose and glucose. In food that is baked, wheat proteins and sugars react and produce the golden brown that often signals the food is almost done. The Maillard Reaction is what gives things like a roast its distinct crust, the perfect sear on a steak, or the golden-brown crust of freshly baked bread.

Taste is also determined through scent, as we mentioned earlier in the article. During the Maillard Reaction, the browning of the meat also creates an amazing and distinct aroma that signals your taste buds and activates the saliva ducts in your mouth. This will activate the signals to the brain that tells you this food is about to be amazing. Smoking meat and Caramelization impact your olfactory sense in a very similar manner. 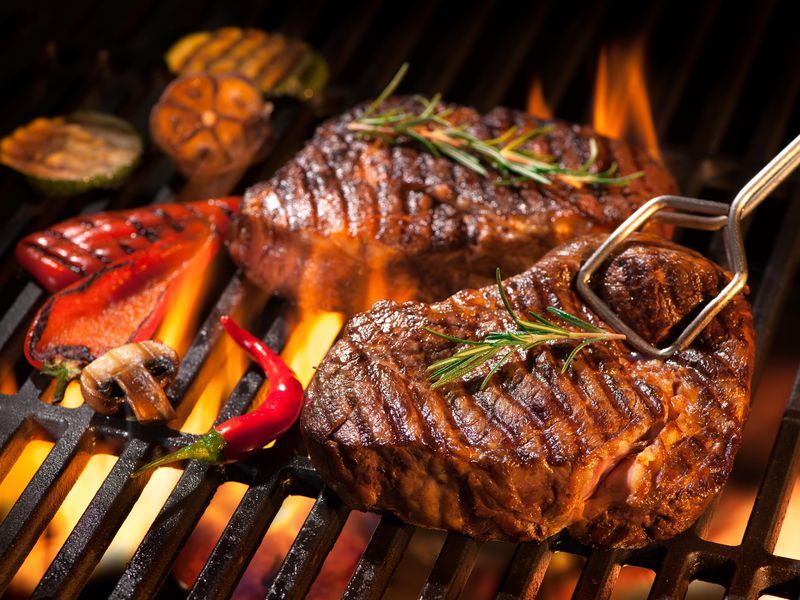 As you can see in this article, as any top BBQ pitmaster knows, to truly be able to cook great BBQ meat you should also understand the science behind BBQ. How our brain deciphers flavors, the complexities and differences of different flavor profiles, and the scientific processes that happen when the meat is cooked plays a big part in why BBQ meat tastes so good.

These types of things are just some of the things you’ll learn from award-winning BBQ pitmasters and grillmasters just like the ones you’ll watch in our online bbq cooking school here at BBQ Champs Academy.

Have you perfected some ways to balance different flavor profiles? Are you having trouble with creating a perfect balance? Leave a comment, we want to hear from you!

12 comments on “Why Does BBQ Meat Taste So Good? (It’s Science)”