A Guide to Beef Cuts: What are Primal and Sub Primal Cuts? 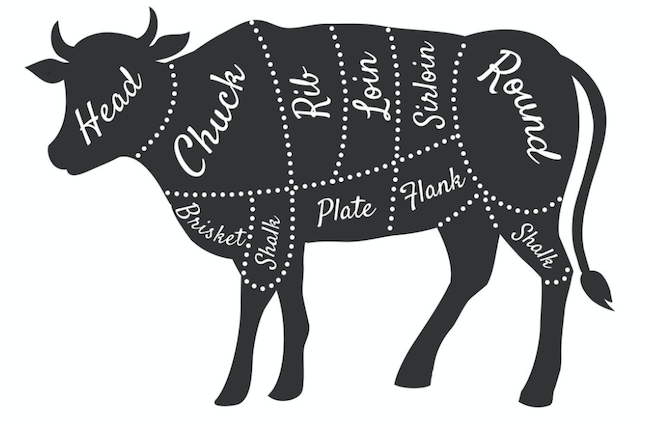 On average, a full-sized steer will yield approximately 490 pounds of “retail” cuts. When you think about it, that’s a whole lot of meat. And that meat will be cut into a variety of different cuts, all dramatically different from each other.

Chances are, you can probably think of the names of a bunch of beef cuts off the top of your head. But, two things that aren’t as widely known are the primal cuts of beef and the sub primal cuts. More specifically, exactly what they are.

Ready for quick beef cuts 101? In this guide, we’ve broken down exactly what the primal and sub primal cuts of beef are:

The term “primal cut” refers to a piece of meat that is one of the first to be removed from the carcass of an animal during the process of butchering it. These cuts of meat are very large compared to what we’re used to seeing sold in the store.

When it comes to a cow, there are 8 primal cuts of beef. Starting from the front and working to the back, these cuts are:

The chuck comes from the forequarter of the cow, which consists of the front chest area up through the shoulder and part of the neck.

The brisket cut is taken from the front breastbone part of the cow, below the chuck. This is the only primal cut that is often sold as the whole cut, which is known as a full packer brisket. Though you can still buy it in its smaller sub primal cuts as well (see below).

The rib primal cut consists of the upper part of the 6th through 12th ribs, located at the central back area of the cow.

Also known as the short plate, the plate cut is located on the underbelly of the cow directly below the rib cut and in front of the flank cut.

The loin cut also comes from the top of the cow but more towards the lower back area, just behind the rib cut. The meat in this area is extremely tender and marbled and is where some of the highest-quality sub primal cuts of beef come from.

The flank primal cut is a boneless cut of meat located at the underbelly of the cow, below the loin.

Taken from the back end of the cow, the round cut consists of the rump and upper part of the hind legs.

When the large primal cuts are then cut into smaller pieces, these are what are known as sub primal cuts, aka secondary cuts. So, those 8 primal cuts from above become many more different cuts. 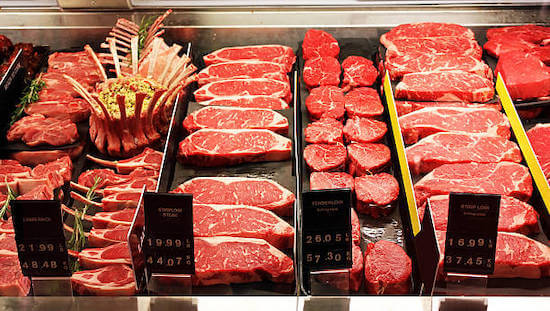 The sub primal cuts that come from each primal cut are:

Ground beef can come from a variety of different prime cuts, with the most popular being ground chuck. But other sources that are often available include the plate, flank, and shank.

As you can see, there is a huge array of different cuts of beef. But it all starts with the primal cuts. Even though all of these beef cuts come from the same cow, they can differ dramatically in their fat content, leanness, bones (or not), etc. Hopefully, this article has helped make the terms “primal cuts” and “sub primal cuts” more clear and you have at least a little better understanding of the dizzying variety of cuts available at the store.

Make sure to also check out our article on how to buy great beef to know exactly what to look for when selecting your cuts.

What primal section do most of your favorite beef cuts come from? Have you broken down a whole primal cut yourself? Leave a comment below and tell us about it!

Do you want to elevate your backyard cooking skills and learn how to perfectly cook a variety of different things including prime rib, tri-tip, and beef ribs? Grab your access to the BBQ Champs Academy Championship Backyard Cooking Classes today! Taught by Champion Pitmasters and Grillmasters, these video classes will show you step-by-step exactly how to cook 20 delicious smoked or grilled recipes!

And if you want to take it up a notch into BBQ competition-level smoking and grilling, make sure to grab your All-Access pass today! These in-depth online BBQ classes, taught by the Champion Grillmasters and BBQ Pitmasters, will show you exactly how to master several different cuts of meat in your smoker or grill. You’ll get all the insider cooking secrets like nowhere else!

Also, make sure to subscribe to the BBQ Champs YouTube channel today so you don’t miss any of the latest competition BBQ news and insider info, straight from the pros!