The Smoke Ring in Meat Explained: What Causes It, If It Really Affects the Taste, & How to Get One

If you have eaten BBQ at a restaurant or spent any time around competition barbecue, chances are you’ve seen that beautiful looking roughly quarter-inch pink band located just under the surface of the smoked meat. This is what is known as the smoke ring.

It is most commonly found in smoked brisket but can appear in other cuts of beef, as well as pork. But, you may be wondering, how do you create it and how much does it equate to “great” BBQ? We’ve got you covered.

In this article, we’ve taken a deep dive into exactly what a smoke ring in meat is and what causes it, how much it really affects the taste of the meat (or not!), and how to get it.

What Causes a Smoke Ring?

A smoke ring is all thanks to a simple chemical reaction that happens in the meat when it is cooked low and slow. This reaction revolves around a protein known as myoglobin, which is present inside the bodies of almost all living vertebrates. Myoglobin works to hold oxygen in the muscle cells and also contains iron pigments (known as hermes) that are rusty red in color.

So, when the meat is being smoked using wood smoke, nitric oxide (NO) and carbon monoxide (CO) is produced. As these gasses envelop the meat while it is cooking, they penetrate just below the surface and interact with the iron in the myoglobin, preventing it from oxidizing and keeping it a bright pink color. The more nitric oxide that gets into the meat, the thicker the ring will be.

Smoke (and therefore NO and CO) cannot penetrate all the way deep into the meat. So, the inner parts of the cut will turn the desired brown color as it cooks, leaving the pink smoke ring just below the surface of the meat. The smoke-ringed part of the meat will, in fact, be cooked but it just won’t change color like the rest of the meat’s interior.

It is important to note that the smoke ring is not caused by the smoke itself, it is caused by the nitrates and nitrites within the gasses in the smoke. So, a huge amount of smoke isn’t needed to create a smoke ring as long as there is a sufficient level of NO and CO present. 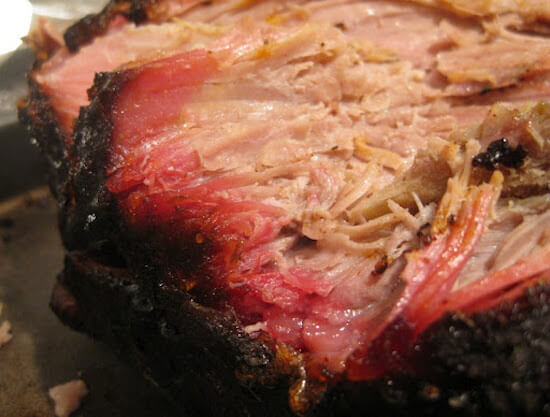 Does the Smoke Ring Enhance the Flavor of the Meat?

This is one of the most common questions when it comes to a smoke ring and the most important one to address. Simply put, the answer is no, a smoke ring will not make the meat taste any better. Any belief that it does is a BBQ myth.

An even, pink, smoke ring definitely looks great to the eye. Many competition barbecue teams always aim for one because many judges are always on the lookout for it and may even question the skill of the pitmaster if it’s not there. Somehow, a smoke ring has become somewhat of an indicator of a job well done.

But the truth is, a smoke ring does nothing to add to the natural flavor of the meat or any seasonings/rubs/sauces used. You can absolutely smoke a piece of meat to perfection without having a single bit of a ring. Alternatively, you can create a “perfect” ring, but still overcook and dry out the meat.

So, a smoke ring has magically gotten to the point where it can convince people that they are eating quality smoked meat while actually being nothing but a mouth-watering illusion.

How to Get a Good Smoke Ring in Meat

While it doesn’t add any additional flavor, having a good smoke ring can give your meat an authentic smokehouse look and can definitely catch the eye of barbecue competition judges (or those friends, family, or neighbors you are trying to impress). So, here are a few tips on how to get a good smoke ring in meat:

Start with colder meat: If you start with colder meat that was taken out of the fridge not long ago and keep your smoker’s temperature down at first, the smoke ring will have more time to form. When meat is cooked hotter from the start, the myoglobin will turn brown faster, which means the NO and CO can’t penetrate very deeply before the meat changes color. So, colder temperatures will help your smoke ring.

Trim the excess fat: If your cut of meat has a thick fat cap, trim it down thinner. NO and CO can penetrate fat, but if the underlying meat oxidizes and changes color before these gasses can get to it, you’re not going to have a smoke ring. 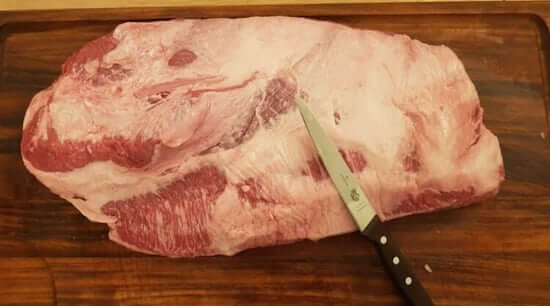 Don’t go too heavy on dry rub: The smoke and gasses need to be able to penetrate the seasoning crust on the exterior. So, don’t overly coat your meat with dry rub. Go with a bit thinner layer than you normally would if you want a nice pink smoke ring.

Smoke it low and slow: The smoke ring will stop growing when the meat hits roughly 160°F. At that point, the myoglobin loses its ability to retain any more oxygen (aka denatures). So, smoking at lower temperatures for as long as possible until the meat reaches the desired internal temperature will help the smoke ring. The muscle proteins will be able to finish breaking down before the pink myoglobin denatures.

Keep the exterior of the meat moist: Keeping the exterior surface wet will significantly help smoke ring formation. This can be done by occasionally spritzing the meat and using a water pan in your smoker. The moisture helps the smoke ring in several ways. Firstly, as the water evaporates from the meat’s surface, it cools the meat, enhancing the condensation of NO. Secondly, the passing smoke chemicals will stick better to the exterior moisture. Finally, the exterior moisture will slightly delay the formation of a thick exterior bark on the meat, which can impede the absorption of the smoke chemicals.

You Can Create a Perfect Smoke Ring Today, But Don’t Feel Like You Have To!

So, as you can see, it’s pretty easy to get a good smoke ring going when you understand exactly what causes it. Follow the tips we covered above and you’ll be well on your way to achieving that thick, pink ring you are aiming for.

But, remember, besides looking cool, a smoke ring doesn’t improve the flavor or quality of your smoked meat. So if you don’t make one don’t think that you are a terrible outdoor cooker or that the meat won’t taste good. You can still smoke great barbecue without ever creating a single smoke ring.

What’s your opinion on smoke rings? Do you like seeing them in smoked meat or could you care less? Or do you have any other tips to achieve a pretty smoke ring? Leave a comment below. We want to hear from you!

If you want to take your meat-smoking skills up to a whole new level, BBQ Champs Academy can help you do just that. Grab your All-Access pass today and follow along in in-depth online video classes, all taught by Champion Grillmasters and Pitmasters. These classes, unlike you will find anywhere else, will show you step-by-step exactly how to cook competition-caliber brisket, pork ribs, pork butt, and chicken.

These online BBQ classes will teach you how to perfectly cook each of these cuts of meat in your smoker or grill. You’ll also get valuable insider info and cooking secrets straight from the pros.

Make sure to also subscribe to the BBQ Champs Academy YouTube channel to get all of the latest competition BBQ news and insider information!