Over the last few years, beef ribs have grown in popularity in the barbecue world. You may have even heard them referred to as “brisket on a stick”. Some of the beef rib cuts have an enormous amount of meat on each bone. They do have some unique characteristics compared to pork ribs, causing many people now to have a hard time choosing which they prefer. Except for many Texas-style BBQ purists who will usually always argue for beef.

But, with so many different cuts and variations of beef ribs available, you may be left a little confused. In this article, we’ll break down exactly what the difference is between pork and beef ribs, what kind of beef ribs to get or ask your butcher for, and what rib cut is best for barbecuing, smoking, or grilling. Let’s take a look:

What’s The Difference Between Beef And Pork Ribs?

You may be wondering what exactly are the differences between beef and pork ribs.  One of the most obvious characteristics of BBQ beef ribs is their larger size compared to pork ribs. Not only in length but also, when referring to beef short ribs, the amount of meat on the bones.

Also, compared to pork ribs, beef ribs are more marbled with an unctuous, gelatinous fat running through them that, when cooked, helps tenderize and flavor the meat. They do have more connective tissue than pork ribs so it is important to make sure you are preparing and cooking them properly to ensure you end up with great-tasting, tender beef. They’ll need more active attention than pork ribs.

The Different Variations Of Beef Ribs

On a steer, there are 13 ribs down each side of the animal. The ribs cover a lot of territory on a steer. About 3 linear feet from the breastbone to the backbone and another 3 to 4 feet from the shoulder to the last rib. Where your ribs are cut from matters a lot as far as the taste, texture, and best method of cooking.

Essentially there are two major types of beef ribs, short ribs and back ribs, and they are very different from each other but both can be tender, beefy, and delectable if cooked properly. 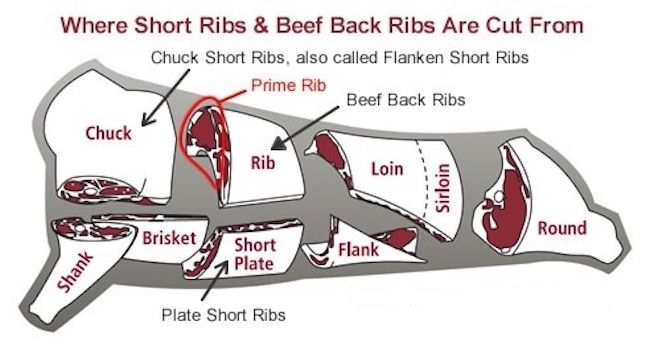 More and more, short ribs are becoming the preferred rib choice for outdoor cooking because of the large amount of meat on top of the bones. This is because short ribs are cut from the front lower section of the steer from the 1st through 5th rib and the lower, ventral section from the 6th through 10th rib. Resulting in almost flat ribs, can reach 12” in length, and often have 1 to 2” of meat on top.

But, oftentimes, a lot of the confusion with beef ribs comes in the fact that there are several different variations in where short ribs are cut from plus different ways they are cut, each with their own name.

Where Short Ribs Are Cut From

Short ribs are cut from two different places on the steer. One area further towards the front and one area on the lower portion. Let’s break it all down:

Plate short ribs come from the lower portion of the rib cage known as the short plate. The short plate runs from the 6th to the 10th rib and sits between the delicious brisket cut in front of it and the flank steak cut behind it. These are the ribs that often garner the name “brisket on a stick” because of their close proximity, length of usually 12”, and 2” of meat on top.

You usually won’t be able to find good quality plate short ribs, cut the way you like, at the grocery store, so your local butcher is your best bet.

Plate short ribs do great being cooked/smoked low and slow. Which allows the fat to render down without drying out the meat.

You’ll find chuck short ribs closer towards the front of the steer right under the chuck, which sits above the shank and brisket. The chuck ribs run from the 1st to the 5th rib. Similar to the plate short ribs, the chuck ribs are still very meaty but are shorter in length, usually 3” to 6”.

Different Variations Of How Short Ribs Are Cut 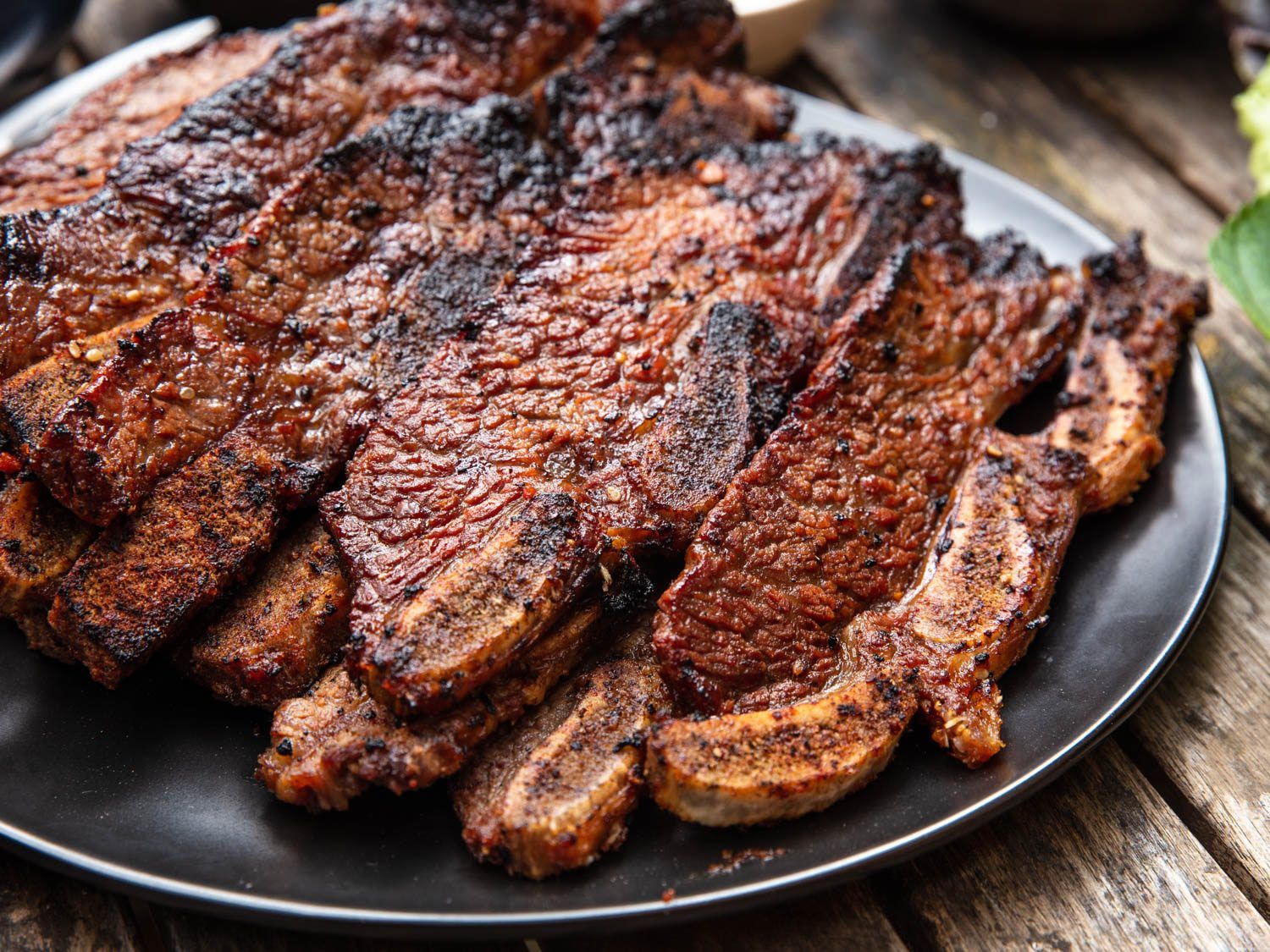 This is the most common type of cut. The English style cut for short ribs means they have been cut between the ribs to separate them, resulting in a thick piece of meat sitting on top of the bones. You can either buy them as a rack of 4 bones, about 3” long and 7” to 8” wide, or cut individually. Plate short ribs are what are frequently available in English cut.

The English style cut will result in a layer of fat and muscle on the top that can either be left on or removed by your butcher.

Flanken-style short ribs are thinner cut, usually about a half-inch thick, that goes across the bones. Resulting in a thinner strip of meat with four to five pieces of bone in it. Chuck short ribs are frequently cut this way.

This cut is good for if you are doing Korean Kalbi style cooking and can be found at Korean markets or cut to order from your butcher.

As we mentioned above with the English cut plate ribs, they will come with a layer of fat and muscle across the top. Getting them untrimmed then just means that you are buying them without that layer being removed by the butcher.

If you get the English cut trimmed, then the butcher will remove a good portion of that latissimus dorsi muscle, and its exterior fat cover.

This is just like the trimmed cut but the butcher will extensively trim the fat layer.

Short rib riblets are an English style cut where the bones have been cut apart individually and then cut into shorter, approximately 1 to 2 inch long pieces with the thick meat on top. These are great for braising or in a slow cooker.

English style ribs can be cut away from the bone to result in a boneless slab of beef rib meat. Your butcher will remove the bones and the intercostal meat. Resulting in a slab of meat that is about 1 to 2” thick and roughly 8” long.

The second type of beef ribs is back ribs. These are cut from the top dorsal area of the steer, just behind the shoulder. Back ribs are what you get when the delicious rib roast (Prime Rib) is removed from the bones. The rib roast is one of the most expensive cuts of beef, so most of the meat will stay with the roast and very little meat is left on top of the rib bones.

So, most of the meat for back ribs will be between the bones. They are also smaller than other types of ribs and cook faster. These ribs are 6 to 8” long with a curved bone.

Back ribs are great for braising or cooking on the grill over indirect heat, as well as adding wood smoke. 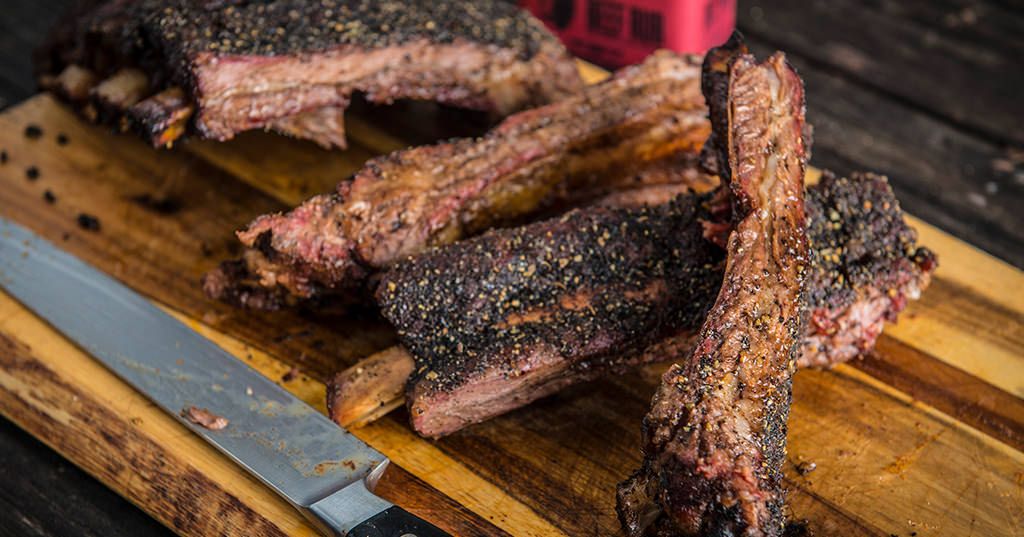 As you can see, there isn’t just one kind of beef rib. There are a lot of different variations available. So, it’s no surprise that many people who are interested in barbecuing or smoking beef ribs get confused as to what they should be buying.

But, hopefully, after reading this article, you’ve got a clearer picture of what beef ribs you might prefer and exactly what to tell your butcher. It’s also important to make sure that you pay attention to the beef grades and get a high-quality beef that is sure to result in some great tasting meat.

Make sure you also check out our article on “10 Insider Tips On How To Smoke Ribs”.

Insider tips and tricks like those are the kinds of things you’ll learn from our Champion Pitmasters and Grillmasters here at BBQ Champs Academy.  If you feel intimidated by cooking beef ribs, we'll show you how to smoke beef ribs like the pros. Learn how to cook them from World Champion pitmaster Joey Smith. He will show you from start to finish how to cook amazing Texas-style BBQ Beef Ribs.

Check out our All-Access pass to get the full inside look at all different types of BBQ. You’ll learn, on stunning high definition 4K video, how to cook competition-worthy barbecue, detailed step-by-step like nowhere else.

Also, make sure to check out our YouTube channel for the latest videos packed full of tips, insider info, and BBQ news. Hit “Subscribe” on our channel so you catch all the latest from BBQ Champs Academy! 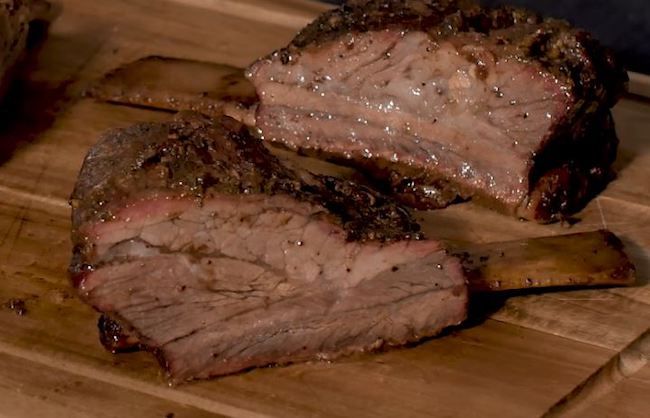