Pork shoulder and pork butt are two different cuts of meat that are very commonly confused. Especially if you are not really familiar with the huge variety of available meat cuts. It also doesn’t help that “pork butt” is somewhat misleading in the name.

When it comes to pork shoulder vs pork butt, there are a lot of differences between the two. It’s important to understand what these are to ensure you get the cut that will give you the result you are looking for.

In this article, we’ve broken down what exactly each of the cuts is, as well as the variety of differences between pork shoulder and pork butt.

What Is Pork Shoulder Exactly?

Both the pork shoulder and the pork butt come from the shoulder of the pig, but they are two different cuts entirely. Pork shoulder, sometimes also called a “picnic shoulder” or “picnic roast”, is the part of the primal cut that is taken from the lower shoulder, above the foreleg. The National Pork Board refers to this cut as “the top portion of the front leg of the hog.”

The meat of a pork shoulder cut, since this is a hardworking region of muscle, is fairly tough due to the high amounts of connective tissue. It is also somewhat dark in color due to a large amount of oxygen-storing myoglobin within this area. Even though this section is somewhat lean, it does have more fat compared to leaner cuts, like pork chops. So, when cooked properly, it can be a very delicious piece of meat.

What Is Pork Butt Exactly? 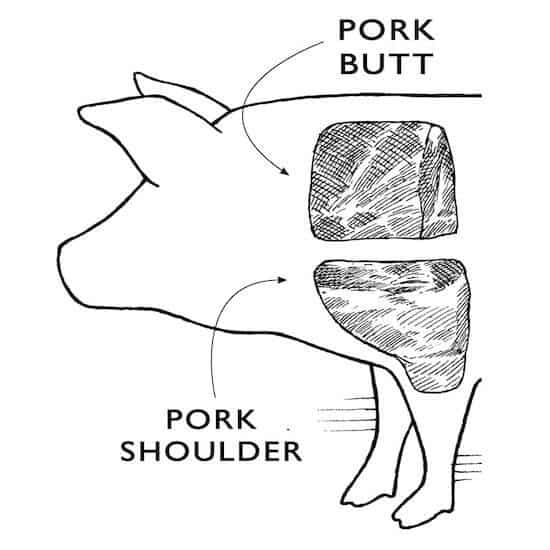 The term “pork butt” is somewhat deceiving since this cut isn’t from the rear of the pig at all. A pork butt, also sometimes referred to as a “Boston butt”, is cut from the upper portion of the pig’s front shoulder, above the pork shoulder cut. This is the cut that is used most often for barbecue pulled pork.

Pork butt is usually one of the relatively inexpensive cuts of meat and is one of the top options for slow smoking. This is because the pork butt contains a lot of connective tissue that needs to be broken down through smoking or braising at lower temperatures for an extended period. But it’s also an extremely fatty cut with lots of delicious fat marbling throughout, making it less prone to drying out compared to other cuts.

The Major Differences Between Pork Shoulder and Pork Butt

The pork shoulder and pork butt are sub-primal cuts that come from the whole front shoulder primal cut. But, these two cuts have very distinct differences.

It’s good to understand exactly what these differences in pork shoulder vs pork butt are. Then you can confidently buy the meat you need for the type of cooking you are doing, the texture and taste you are going for, and how you are wanting to serve it.

Here is a breakdown of the key differences between pork shoulder and pork butt:

Shape of the Cut

Usually, butchers will cut a pork shoulder in a tapered, triangular shape and sell it with the skin still attached. If you get a boneless pork shoulder, it will typically be sold with  netting around it to hold it together. When you remove this netting, the meat will "unfold" into an uneven layer.

Alternatively, a pork butt will be a uniform, rectangular-shaped piece of meat with the skin off. You can buy a pork butt either bone-in or without and it is often sold with the fat cap still intact.

Don’t be afraid to ask the butcher for exactly what you want/need (bone-in, deboned, fat cap trimmed away, etc.) 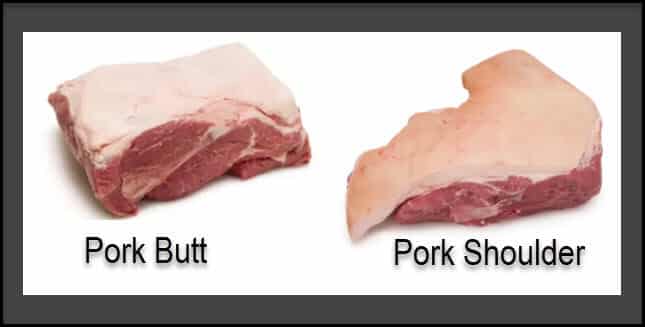 Since it comes from more of the working muscle of the lower shoulder, pork shoulder usually has less fat and may be chewy or tough. Pork butt, on the other hand, is well-marbled with more intramuscular fat running throughout, yielding more tender and soft meat.

In general, pork shoulder will usually be cheaper in comparison to pork butt. This is because pork butt is often a larger piece of meat. But, both cuts are considered economical cuts of meat compared to others.

If you’re not sure which cut you want to cook with between pork shoulder and pork butt, it can be helpful to consider how many people you are feeding and then factor in the price that way.

Cooking It / When to Use It

With pork butt, you’ll get the best results by either slowly smoking it or cooking it in a slow cooker. This allows the fat and connective tissues to break down and give you that deliciously moist and tender meat you’re going for. Pork butt is most often smoked and then used to make pulled pork dishes. But it is also very good when cooked in a slow-cooker to make things like Mexican-style carnitas dishes. 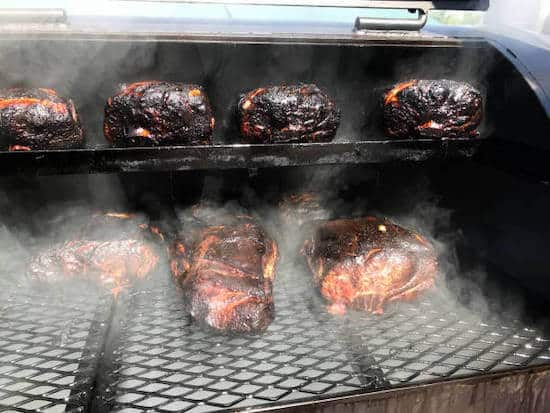 Pork shoulder usually does better when cooked at slightly higher temperatures in less time. It is often roasted on the grill to enhance its natural flavors. Also, this cut is commonly cooked with the skin on to achieve a nice crispy exterior and then sliced when it’s done.

Fat equals flavor. So, due to pork butt having a higher fat content throughout, it often tends to be more flavorful than a pork shoulder. But, like with any meat, the flavor also largely depends on how you cook it. Different cooking methods and techniques can be used that all have a different effect on the flavor.

How you cook your pork shoulder or pork butt and what is done to it after it is cooked will determine how long it can be stored. There are big differences in this aspect when it comes to pork shoulder vs pork butt.

If you smoke the meat and leave it whole, it lasts a couple of days if stored properly in an airtight container and be fine. This prevents any moisture from getting in and ruining the meat’s structure.

But, if you plan on using your smoked pork butt for pulled pork, which means “pulling it” right after it is done cooking, then it is recommended to eat it within a day or so for best results. Pulled pork can become tasteless and dry very quickly if left out. If you are going to store some, make sure it is in an airtight container.

It is also important with either of these cuts, after they are done cooking, to make sure that they are completely cooled down before putting any of it in the fridge.

Either Choice in Pork Cuts Can Give You a Delicious Result

There’s no doubt that these two cuts are two of the most popular cuts of pork, can be used for a variety of different things, and are very often confused for each other. But now that you know the differences between pork shoulder and pork butt, you can make an informed decision on which piece is best for the cooking method you want to do and the result you want to achieve.

If you want to slow smoke a piece of pork and enjoy deliciously tender meat, go for the pork butt. If you want pork with crispy skin and a slightly tougher texture, grab a pork shoulder. Either way, when cooked properly, you can end up with a final result that you’ll be proud to show off.

Do you have a favorite between pork shoulder and pork butt? Have you recently cooked one or the other for the first time? Leave a comment below and tell us about it. We want to hear from you!

Want to learn how to smoke a perfect pork butt and other cuts of meat straight from Champion Pitmasters? Or learn how to grill a perfect thick-cut steak with the best Grillmasters? If so, check out our in-depth, first-of-their-kind virtual BBQ classes. You can learn all the competition-level smoking and grilling techniques as well as insider tips that’ll have you quickly showing off competitor-caliber barbecue. Grab your All-Access pass today!

Make sure to also Subscribe to the BBQ Champs Academy YouTube channel to get all the latest competition barbecue news and insider info, straight from the pros!