A common mental rabbit hole that people fall down when thinking about options of meat to smoke (or grill) is beef ribs vs pork ribs. Of course, there’s more to it than the fact that they come from two different animals. Frequently asked questions often include things like “what is the difference in size between the two?”, “which is cheaper”, “which tastes better?”, etc.

Don’t worry, we’ve got you covered. In this article, we break down the differences that you need to know between pork ribs and beef ribs. Let’s take a look:

In this article, we’ll cover the differences between beef and pork ribs in a generalized sense. But, as you may know, both types of ribs are usually available in a variety of different cuts at your local butcher shop. Here is a quick breakdown of the different rib cuts, as some of the specific cuts are referenced throughout the rest of this article.

For more info on these different types of pork ribs, check out our in-depth beef rib cuts article.

The process of smoking pork ribs and beef ribs will be very similar. But, one of the first differences you may notice when it comes to beef ribs vs pork ribs is their size. In general, beef ribs will be bigger. All of the beef rib cuts will be longer than pork rib cuts and, in the case of beef short ribs in particular, will have more meat on them.

Many times, beef ribs will be 8 to 12 inches long and be weighed in pounds, while pork ribs will usually be 3 to 6 inches long and weighed in ounces. Sometimes, because of their size, you may hear beef ribs referred to as “dinosaur ribs”. In most cases, these are going to be plate short ribs in particular. There are some instances where butchers will cut a rack of beef ribs in half along the full length of the rack. So, in this case, the beef rib bones would be very similar in length to a rack of pork ribs.

Also, because beef ribs are usually larger, they will often take longer to cook compared to pork ribs in general.

Ratio of Meat to Fat

Of course, the amount of meat and the fat content on ribs will vary from animal to animal depending on size, breed, and the specific cut. But, there are some general differences in the fat content between beef ribs and pork ribs.

For most cuts of pork ribs, they will be reasonably lean (more meat than fat) and moderately meaty when compared to beef. As you go lower down the rib cage of a pig, the fat content will increase, with rib tips being mainly fat with bone. For baby back, spare, and St. Louis-style pork ribs, you’ll usually get quite a lot of bone and the amount of bone will be pretty consistent across the three types of cuts.

Even though pigs may seem like a chunkier animal, beef ribs will have a much higher fat content and will be closer to even portions of fat and meat. You’ll get a lot more meat on top of the bones of beef ribs and the meat is more marbled with gelatinous fat. This fat spider webs throughout the meat, helping to tenderize it and create a deeper flavor.

The meat on beef ribs does also have more connective tissue compared to pork ribs so they will need more active attention while cooking them to ensure they are cooked to a delicious and tender finish. 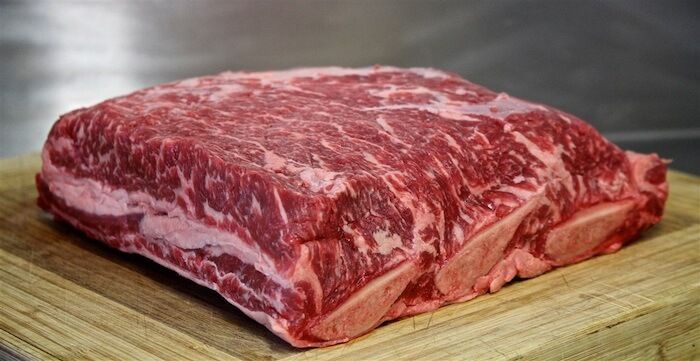 The difference of fat between beef ribs and pork ribs, as well as the amount of meat in general, does affect the nutritional content between the two as well.

Ribs, both beef and pork, are great options when you are looking for more affordable cuts of meat. Prices will, of course, fluctuate based on location, quality of the meat, and the specific cut of ribs.

For example, a rack of ribs from the big-box grocery store case will be less expensive than a rack at your local butcher shop that is sourced from a local organic farm.

But, when comparing the two types, generally speaking, pork ribs will cost less than beef ribs. There will usually be about a $1.50 per pound difference between the two.

The true answer to this question will be very subjective. Some people prefer the taste and mouthfeel of pork ribs over beef ribs. While others feel the opposite. It all comes down to the type of taste you and those you are cooking for prefer.

Compared to pork ribs, beef ribs, like all good cuts of beef, have a strong distinctive flavor that doesn’t need much additional seasoning other than salt and pepper (and sometimes garlic). Many say beef has an umami-based taste.

Umami is the 5th flavor profile that our tongues can taste and is sometimes grouped in with “salty”. But, umami combines salty with hearty and earthy. Beef is high in all of the elements and acids that make up the umami flavor profile (check out this article for more on that!). Umami is also found in things like mushrooms, parmesan cheese, seaweed, soy sauce, bacon, and more.

Alternatively, pork ribs have a taste that is not nearly as strong as beef. Some even describe the taste as slightly sweet. Without additional flavorings, pork ribs often taste very similar to pork chops. But, pork ribs can pair well with a variety of different combinations of spices, rubs, and bbq sauces. 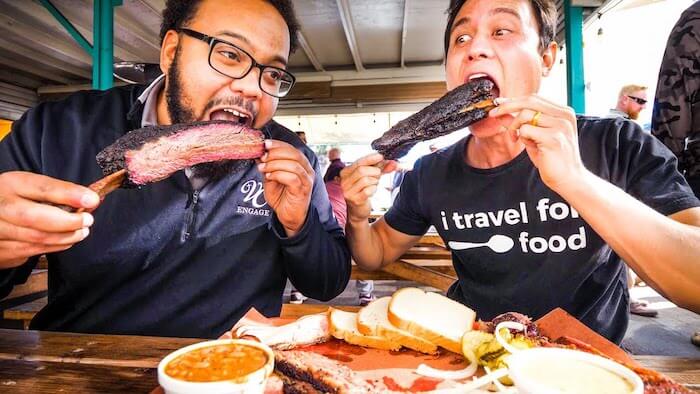 The Preference Between Beef Ribs & Pork Ribs is Up to You

As you can see, there are some distinct differences between these two types of ribs. Knowing the differences and more about different meats will help you more confidently become a master of backyard cooking.

When it comes to pork ribs vs beef ribs, it would be hard to determine if one is necessarily better than the other. It really comes down to personal preference at the time. Both are great options when it comes to a delicious cut of meat that smokes well and will feed a crowd.

Do you favor one of these types of ribs over the other? Plan on smoking ribs soon? Tell us about it by dropping a comment below. We want to hear from you!

If you want step-by-step instructions straight from the champion Pitmasters and Grillmasters on cooking a variety of delicious foods, including ribs, check out our backyard barbecue cooking classes here at BBQ Champs Academy. If you really want to step your competition outdoor cooking game up, check out the All-Access passes to learn everything you need to know to cook award-winning meat.

Make sure to also check out our YouTube channel and stay on top of all the latest insider tips, secrets, and BBQ news straight from the pros!